I am now a Country Girl, and somewhat of a Lonely Liberal. I come to you from the corn and bean (as in soy) fields of southwestern Illinois, 30 miles north of St. Louis, near the confluence of the mighty Illinois, Missouri and Mississippi Rivers. This is rural America, baby. God’s country.

I am a city girl, transplanted here 7 years ago from Washington, D.C., where I owned a bar, a nightclub and a restaurant. I went from living in multicultural Mt. Pleasant and arguing about American foreign policy with opinionated Somali cab drivers to living on a 40-acre farm in the middle of nowhere and listening to my husband rant about the overspray from the insecticide truck that killed his peach trees. It was a difficult transition. Very difficult.

This may be a blue state, but many of the sensibilities here are shockingly red, pretty conservative to this former city girl. This blog is about what it’s like to be a progressive in a traditional community, what it’s like to live where you can’t get the New York Times or even the St. Louis Post-Dispatch delivered, where Wal-Mart is master of all it surveys, where foreign languages aren’t taught until high school, where art and music are offered to the elementary school students only once every other week, where few people know or care who Paul Krugman is (which, actually, is sort of a relief).

The Country Girl will also be about the skunks who live under our house; the coyotes that howl in my yard at night; the surprisingly competitive baking competition at the county fair (which, incidentally, I won two years ago with my chocolate almond biscotti); my speckled rooster Ruben and his harem of hens; my pathetic and ignored garden; my children, Willa and Oskar (who has the exciting witches’ brew of Tourette’s syndrome, ADHD, ODD and PDD - fun!); play dates gone bad; my mother-in-law; my manly husband, famed furniture maker Dave Stine of Stine Woodworking; the bar I still co-own in D.C., the Toledo Lounge (15 years and counting!); and all other things – political, social, cultural and personal -- in the world of the Country Girl.

Posted by Stephanie Abbajay at 2:32 PM

Stephanie Abbajay
Stephanie Abbajay is a professional writer and editor living in St. Louis, MO. She is a columnist for the Jersey County Journal and a contributor to the American Interest magazine. 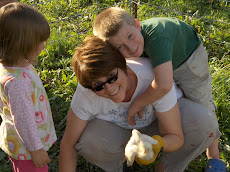 What would country life be without chickens? 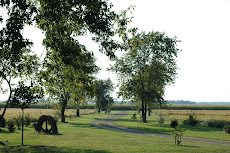 The view from the porch

The house in Dow 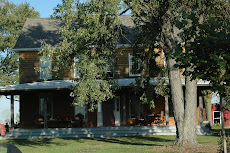 Built in 1871, with accompanying drafts and creaks 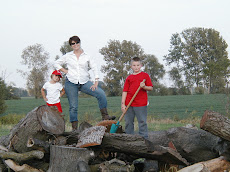